This is a special invitation to participate in the virtual BMD eboard meeting this Sunday, May 17 at 6 p.m. by calling into our conference call number 701-802-5390 and entering access code 2545046#.

The agenda is printed at the end of this email but I am pleased to announce the Agi Kessler, chair of the CaDEM resolution committee, will be our guest speaker. Agi will speak on  the importance of submitting resolutions, how you can submit resolutions and how the resolution committee will work on passing resolutions at the first ever July 24- 26 virtual CaDEM Eboard meeting. Most importantly she will impart specific information on BMD’s resolution on cannabis lounges and what we can do to help it get passed.

The main action to be discussed at our virtual eboard meeting centers on the most disappointing and troublesome aspect of implementing Prop. 64 - the continuing refusal of almost 75% of California cites and counties to allow cannabis businesses to operate in their community – even in those communities that voted in favor of Prop. 64.

Not only does this refusal undermine the will of the voters in passing Prop. 64, but it forces the residents of these communities to either drive many miles to areas that do allow cannabis distribution or, as most probably do, continue to buy it from illegal local non-licensed dealers.

As far as I know there is no concerted organized effort to change this. There are two ways to change it:

Over the last several years I have beaten my head repeatedly against a wall trying to get cities in the Inland Empire to implement ordinances allowing cannabis businesses. With very few exceptions, an aching head is all I got. I have spoken with others, such as BMD Secretary Susan O’Leary and others who have had pretty much the same experience. As a consequence, I do not have much confidence in changing the situation with Way #1.

Way #2, electing people to office who have already committed to allowing cannabis businesses to operate is the way to go and I believe BMD is ideally suited to undertake the development of such a program.

Republicans dominate local politics in California because the Republican party had put a lot of grassroot effort into electing Republicans to non-partisan local governing bodies such as school boards and water districts as well as city councils and county boards. Democrats did not and CaDEM belatedly recognized that this had to be changed.

Consequently, over the last four years, there has been a push for Democrats to run for these non-partisan offices. I was part of this effort when local Democrats asked me to run for the San Gorgonio Memorial Healthcare District. With their help I was elected.

Since Democrats are far more likely to support implementing cannabis legalization in their communities, this is the perfect opportunity to get Democrats elected to local offices and at the same time get Prop. 64 fully implemented in areas that have thwarted its implementation.

As a result of the COVID-19 virus, it is expected that most California marijuana legislation will not see the light of day or even a darkened committee room in the 2020 legislative session. At the virtual BMD eboard meeting this Sunday we will be discussing how to put together a program that will train local cannabis advocates in communities that do not allow cannabis businesses to get active with their county Democratic Central Committees. Working with local Democrats, they will recruit Democratic candidates who support the opening of cannabis businesses to run for local offices and then help get them elected.

It should be noted that SAM (Smart Approaches to Marijuana) a nation-wide organization opposed to cannabis legalization, has instituted a program to help local communities in states that have legalized medical and recreational marijuana to frustrate and undermine efforts to allow cannabis businesses as permitted by their state laws. To read their press release about their program CLICK HERE.

CaDEM already opposes what SAM is doing to undermine Prop. 64 as CaDEM passed a BMD resolution in 2018 calling on local governments to allow cannabis businesses to operate. The party should be especially concerned then because although SAM is supposedly non-partisan, SAM’s initiative will help re-elect Republicans to local offices.

I believe we can get the support of CaDEM and major Democratic funders to support our program with time and money to elect pro-cannabis candidates to office if we develop one that looks like it is feasible and can actually help elect Democrats to office.

Take a gander at our agenda below then mark your calendar for Sunday, May 17 at 6 p.m. and join us with special guest Agi Kessler for an interesting, informative, entertaining and engaging meeting. We would benefit from hearing your ideas during the discussions on the agenda items so please call-in. 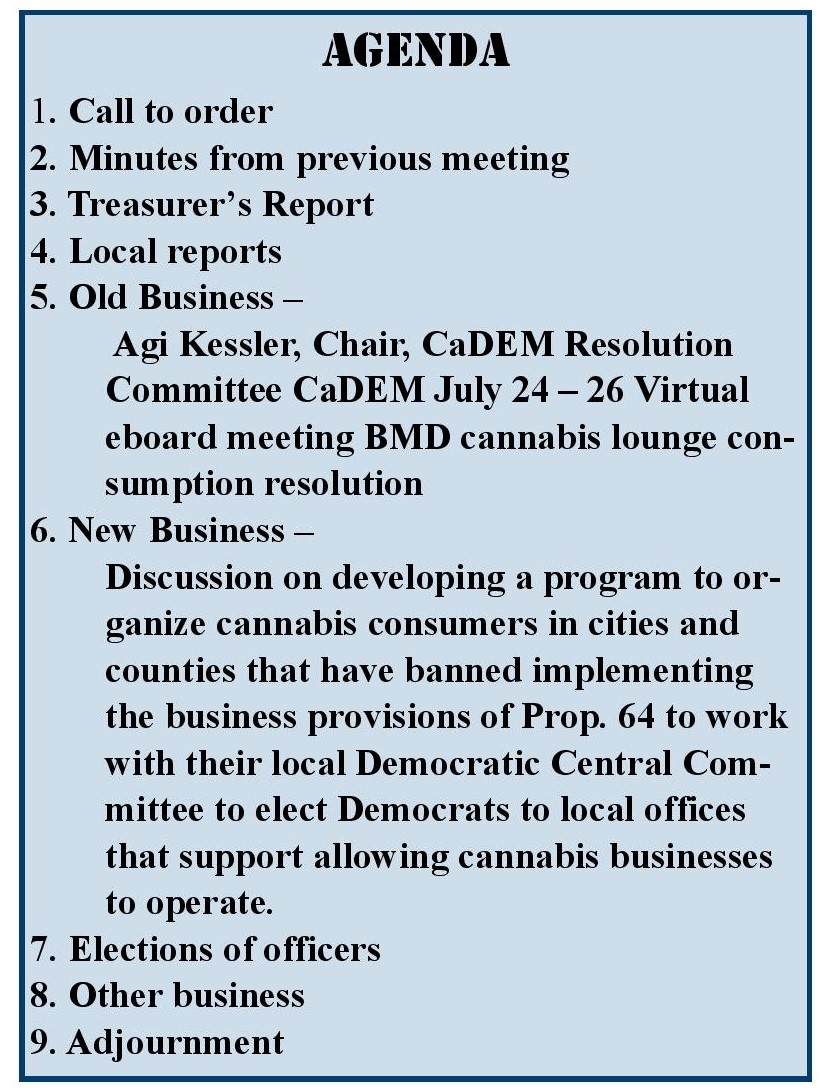 Its super easy, super quick and cheap to join the Brownie Mary Democrats– won’t take even 60 seconds. You know it’s the right thing to do and along with cannabis, joining BMD will help you sleep better at night. To join now CLICK HERE.